Don’t laugh.  I know we are all thinking that March Madness was cancelled because of the coronavirus, but hear me out.

I love March Madness.  It is my favorite event that happens each year in both the worlds of sports and of entertainment.  I watch every game I can.  I never go to bed without staying up to watch ‘One Shining Moment’.  And I always passionately support my Jayhawks.  This looked like it could be our year to win it all.

That’s why, when Lent began, I made an exception to my fast.  I chose to fast from all streaming services this year.  For me, that includes Youtube, Netflix, Amazon Prime, and Sling TV.  This is a fast that I have needed for a while.  I am easily distracted, and these streaming services (especially Youtube) were distracting me from better and more productive uses of my time.

Except of course none of that happened.  Last week we were told that March Madness was dead.  It wouldn’t be rescheduled.  A champion wouldn’t be named.  It was just over.

Now do I really believe that God cancelled March Madness because I wouldn’t give it up for Lent?  Not really.  Obviously something much more serious is impacting our world right now, and we are having to sacrifice some things we enjoy to protect and love others.

But I do think that in the midst of this craziness, God is using this basketball outage to teach me (and many others) an important lesson about idolatry.

When we think of idolatry, our minds usually race to images of pagans prostrating themselves before large golden idols.  We think of Canaanites, of Ba’al, of child sacrifice.  And when we read in the Old Testament that the Israelites turned to idolatry over and over and over, this is what we imagine they were doing.

That image is only half true, though.  While the Israelites did turn to this sort of idolatry every generation or so, they also clung to a sort of halfway obedience to God.  They would worship at the Temple… and at their local Asherah pole.  They would offer sacrifices to multiple gods, including Yahweh, based on whichever god they thought could meet their needs.

Their problem was not that they abandoned God.  Their problem was that their halfway obedience is not enough for our God.  As he reminds them several times, he is a jealous God.  He wants all of us, and in his jealousy he destroys any idol that would rob him of our love.

Our God communicated his jealous love for his people through his prophets, repeatedly warning them about the consequences of disobedience and also of his steadfast, faithful love for them.

However, there are two occasions that always stand out to me—two occasions where God didn’t just prompt a prophet to speak about idolatry, but he prompted someone to actually go smash some idols.

The first was the judge Gideon.  (You can read about him in Judges 6-7.)

God called Gideon at a time when the Israelites were enslaved by the Midianites because they had turned from worshipping God (yet again) to worship Ba’al and Asherah.  God commands Gideon to go and free his people.

But first, before he sets Israel free militarily, Gideon has to set them free spiritually.  God tells Gideon to do something specific—tear down his own father’s altars to Ba’al and Asherah.  Gideon obeys, but he does it at night because he is scared of his family and the townspeople.

And he has reason to fear, it turns out.  The next morning, when the people see the smashed altars, they are livid.  They are ready to kill Gideon until his father intervenes and says that if Ba’al really is a god, he can defend himself.  And of course Ba’al isn’t, and he doesn’t.

It makes me wonder though: why does Gideon’s community have such a strong negative reaction when he smashes their idols?  It’s because we become emotionally and spiritually dependent on our idols.  And when an idol is taken away, we experience fear and anger in that emotional/spiritual void.

It doesn’t matter if that idol is an image of Ba’al or a basketball tournament or a stock market.  When an idol is taken away from you, you will experience that loss in strong ways, whether as fear or anger or March Sadness. 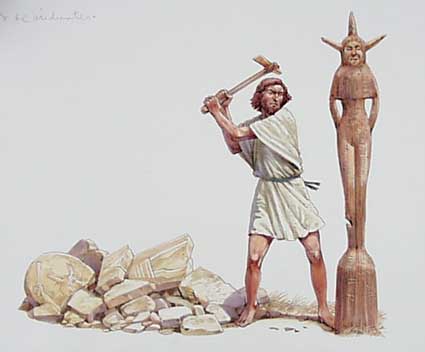 The other OT idol-smasher isn’t nearly as shy about it as Gideon was.  Gideon smashed idols at night to avoid being seen, but young King Josiah smashed every idol he could find in Israel.  And he did so in broad daylight.

2 Chronicles 34:4 tells us, “Under his direction the altars of the Ba’als were torn down; he cut to pieces the incense altars that were above them, and he smashed the Asherah poles and the idols.  These he broke to pieces and scattered over the graves of those who has sacrificed to them.”

Josiah wasn’t messing around.  In 34:7, we are told “he crushed the idols to powder.”

Josiah was King of Judah shortly before the exile to Babylon.  He was the last Godly king, and unfortunately these reforms he made came about too late.  He smashed the idols that littered the countryside.  But he couldn’t smash the idolatrous hearts of his people, and as soon as he was dead, they returned to their idolatry.

This also teaches us something about idolatry.  Our idols aren’t really destroyed if someone or something else destroys them for us.  Right now many American idols are being knocked down by the Coronavirus.  They are being removed from our lives for a time.  But if we don’t remove them from their place in our hearts, they will rule again when this crisis is over.  Idols never go away on their own.  We have to smash them ourselves.

Back to March Madness… This current crisis has rightly exposed my love of basketball as a potential idol in my life.  (My unwillingness to give it up for a month to focus on my relationship with God should be evidence enough.)

I suspect that many of us are in that same place right now… Our idols are being exposed—and smashed to pieces—by the virus.  Our sports, our economy, our education system, our mobility, our social lives… pretty much everything except the idol of technology is being impacted, disrupted, or completely destroyed by the pandemic.

Most of these things are not bad things, but they have become idols in that we depend on them in unhealthy ways.  Facing life without these idols for a few weeks can be spiritually constructive for us if we will go beyond just having our idols smashed for us by circumstances and actually allow God to clear our hearts of their idols and put everything in the correct order.

My prayer is that on the far side of this crisis, we will be one step closer to getting our priorities in the correct order, with God at the top.

Hopefully this time next year, I will be enjoying March Madness with all of you in a post-coronavirus world.

And hopefully, if God asks me to, I’ll give up March Madness of my own free will and not ruin this for everyone again.