I visited Bethlehem on a recent trip to Israel.  I’d been to Israel once before, but we didn’t go to Bethlehem on that trip because my group wasn’t allowed to go into Palestinian controlled areas. (Today Bethlehem is in the Palestinian held area outside of Jerusalem, which means that the border wall between Israel and Palestine runs right around the edge of Bethlehem.)

This time I was determined to make it to Bethlehem.  Rather than trying to drive across the border, I went to Bethlehem as part of a tour group that started in Jerusalem.  (Jerusalem and Bethlehem are only about 7 miles apart.)  Our Israeli driver drove us to the Palestinian border and through a gate in the wall, where we jumped out of his van and into two mini vans driven by Palestinian Christians.  My driver was named John.  “Like John the Baptist,” he told us. 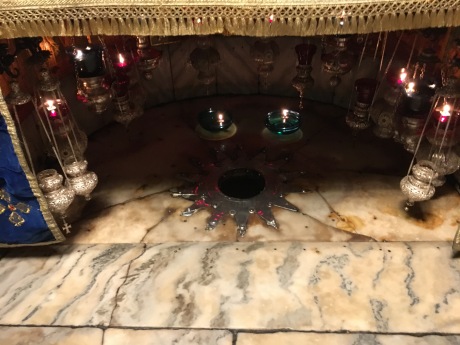 John drove us to the Church of the Nativity and other sites associated with the Christ child around Bethlehem.  Our tour guide, George, told us all about the history of the Church of the Nativity. He explained that Christians in Bethlehem had revered the site and built churches there even in the centuries before Constantine legalized Christianity, which is why it is our best guess today for the site where God came to earth.

George showed us the star that marks the place where Christ was born, and the rooms under the church where Jerome studied Hebrew and translated the Vulgate, something that was of particular interest to me.  And then John drove us back to the border wall, where we climbed back into the Israeli bus to head back to Jerusalem. 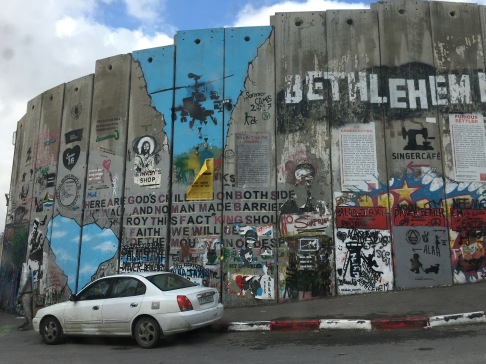 The wall near the gate is decorated with protest art that has been funded by the famous British graffiti artist Banksy.  No matter how you feel about the Israeli-Palestinian conflict, the art is a stark reminder of the complexity of the situation and the human lives that are impacted on both sides of the wall.

Opposite the wall, a dove wearing a bulletproof vest is painted on the side of a building bearing a “Welcome to Bethlehem” sign. 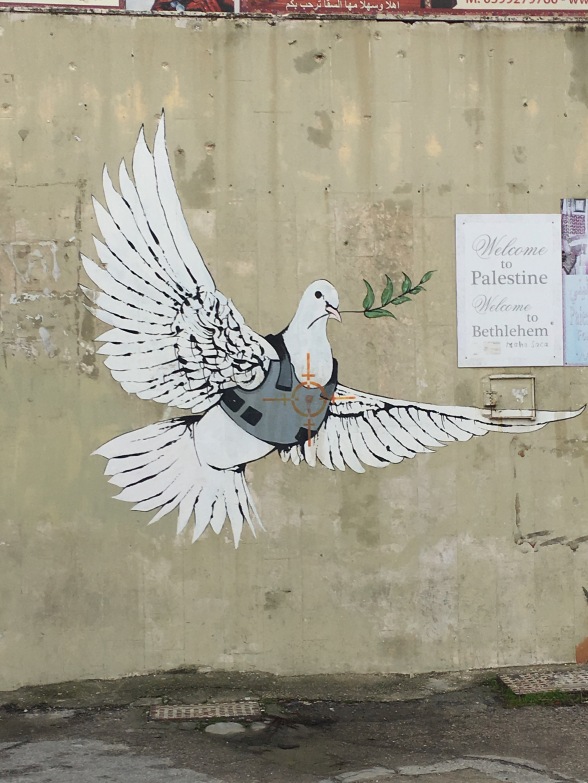 Out of everything I saw in Bethlehem that day—the Church of the Nativity, the shepherd’s cave, Jerome’s tomb—the site that impacted me the most was the painting of the dove in the bulletproof vest.  And it wasn’t because of any historical significance, but because of its symbolic significance.

In the very place where the Prince of Peace was born, the peace is so fragile that it needs a bulletproof vest just to survive.  Talk about complex.

It’s not just the Israel-Palestine conflict that’s complex.  Peace in general is complex.  When two sides have competing goals and desires, it is not simple to infuse the situation with peace.  In worldly terms, peace usually means that one side loses.  As Tacitus said about the Romans, “They create a desert and call it peace.”

The winning side declares victory, and peace ‘breaks out’.  But it isn’t real peace.  Someone will always be dissatisfied.  And someday, someone who has been wronged and forgotten will take a shot at peace, and so the dove must wear its bulletproof vest.

And yet here in Bethlehem, near the center of one of the least peaceful places on earth, the Prince of Peace was born.  Its peace was as fragile then as it is today.  Just ask the little boys who died at the end of Herod’s swords.  Jesus came into a world as far from peace as it could possibly be, and 2,000 years later one might look around, see that not much has changed, and ask what Jesus really accomplished in terms of peace.

Ephesians 2:14-18 says, “Christ is our peace. He made both Jews and Gentiles into one group. With his body, he broke down the barrier of hatred that divided us. He canceled the detailed rules of the Law so that he could create one new person out of the two groups, making peace. He reconciled them both as one body to God by the cross, which ended the hostility to God. When he came, he announced the good news of peace to you who were far away from God and to those who were near. We both have access to the Father through Christ by the one Spirit.”

The world looks at peace as something external.  Let’s create a peace plan for the Middle East that everyone can follow.  Let’s build a wall that will give a semblance of peace on both sides without addressing the conflict.  Let’s reach a compromise in Congress so Democrats and Republicans can work across aisles.  Let’s put together a One Church plan that everyone in the UMC can get behind. 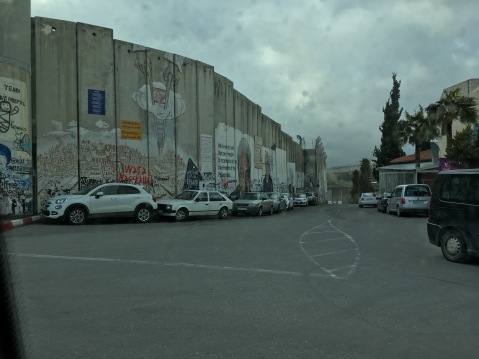 None of these goals are necessarily ill-intentioned on the surface.  But none of them reach their goal.  They don’t make peace.  And they don’t take the bull’s-eye off of peace’s vulnerable chest.

Jesus didn’t create peace as something external to himself.  He himself IS our peace.  He made peace in his body on the cross. Peace wasn’t found in a compromise or a peace plan or a wall. It was found in a broken body freely given in love for the world.

As Paul wrote, “With his body, he broke down the barrier of hatred that divided us.”  Only in Christ is real peace possible between nations and races and church splits and families and neighbors and enemies.  Only the peace of Christ is vulnerable enough to go out into the world without it’s bulletproof vest.

I love that Bethlehem’s dove wears a bulletproof vest.  It needs it. Not so with us.  Not only does the peace of Christ not need protection, but intentionally avoids protection.  True peace is found in the self-giving love of God, the love he gave to us and the love the Spirit inside us allows us to give to others.

Jesus reminds us that “Blessed are the peacemakers, for they will be called children of God.”  To make peace as Christ made peace with us is to live as God’s child.  It doesn’t get simpler than that.  A Christian has no enemies, because a Christian has been reconciled to God and to all people by the cross.

“Let the peace of Christ rule in your hearts, since as members of one body you were called to peace.  And be thankful.” -Colossians 3:15